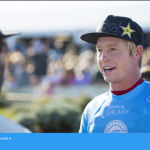 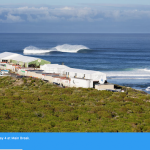 The Margaret River Pro event consists of the top 36 male surfers and the top 18 female surfers in the world. This surfing comp takes place on the Margaret River, famous for its world-class waves, and as thousands of spectators flock to the surfers point, things are getting pretty amped.

The quarter final round saw John John Florence knock out Jay Davies from Australia with a score of 17.87. Jay Davies however only managed to accumulate a score of 13.84, and over the two waves, John John Florence from Hawaii was certainly the standout winner. The second heat saw USA born Nat Young surf against Michel Bourez, and even though this one was a little closer, Nat Young proved to be a winner in both waves.

Heat 3 saw Taj Burrow from Australia verse a fellow Australian, Julian Wilson. Taj put on a great display and was a clear winner over the two waves. Heat 4 was Adriano de Souza verses Kelly Slater, and Adriano de Souza came out on top in both waves.
In the upcoming semi-finals, we have a sweet matchup between some very talented surfers. All four surfers that have made it into this round have outscored their competition in both waves, so there’s no telling who the winner will be.

John John Florence, a personal favourite for many, going up against Nat Young from the USA. We also have Taj Burrow vs. Adriano de Souza and with the winner advancing into the final round; it’s safe to say that tensions are rising between the group.
With not long to go until the winner is crowned, many people expect the final round to be high scoring with some interesting matchups forming.

WHAT DID MIKEY DO LAST TUESDAY?

Jordy Smith checkin out Surfers Paradise from his own perspective

De Souza making the most of what was an average wave

Brazilian beauties were in full force at this years comp

Adriano De Souza carvin it up

Matt Biolos of Lost Mayhem shaping out of the DMS Factory, Australia

Matt Biolos of Lost Mayhem shaping out of the DMS Factory, Australia

The Lost Mayhem man of the moment, Dave Tarantini with Dan & Guy

Dan & Asher Wells with his family

The carbon wrap technology on a new Lost Mayhem surfboard

The crew here at DMS HQ have been goin hard over the last few months and we’re pleased to announce that our carbon wrap technology has been taken on by Lost Mayhem Surfboards & their shaper Matt Biolos. Dan & Matt will be working on pushing out the carbon wrap range exclusive to the DMS & Lost brands around the world over the coming year so stay tuned. If you’re after a carbon wrap in Australia, check out the new website for more info… CarbonWrapSurfboards.com #BuiltToBoost

March 1st also sees the first SALTFEST happening on the Gold Coast. A surf festival up at Kirra Community Hall and DMS will be having a stall located there on the day with some boards & a few other things for sale. If you get down to Saltfest, make sure you drop in and say hi to our guys who will be manning the stall & ready to help out with any queries you may have.

Our crazy mate Jup Brown is still running across the USA (over 5000kms) from Coast to Coast & we’re stoked to say that we sponsor him! If you’re in the USA & see a crazy kiwi running the land, give him a high five, run a few miles with him & donate to his charity of choice. This guy has a heart of gold!

Check out his adventures so far… Jup Brown
We’re also pushing the release of Thundercloud by One Palm Media. If you haven’t already seen it yet, it’s sitting at number one spot on the documentary list in iTunes so go check it out…

Thundercloud by One Palm Media

And when you purchase your next board from DMS, be sure to add on a couple of dollars and sponsor the $2 a board project. This group is all about boardriders helping the environment.

Currently 40% of the donations are going towards the Fiji SAD (Surfers against Destruction).

“We aim to provide mooring buoys to be located on the famous surfing reefs, this will ensure boats tie up instead of throwing anchor’s over the side causing damage to the living coral and reef below.”

The new year sees loads happening on the DMS front. With the carbon wrap taking precendence, we’ll be pushing this mad technology out into the world with full gusto! Keep an eye out in the latest Tracks and Surfing World magazines for our latest ads.

Adam Bennetts made it back to the Gold Coast’s shores after a stint in Hawaii. He’s be kind enough to share his latest mix on sound cloud so for those of you looking for a little boost to push you through the week, go listen to this…

Now get out there, get amongst it and keep us posted via our Facebook page all the happenings in the surfing world!